Ballad of a Shinigami
しにがみのバラッド
episodes: 6

Shinigami no Ballad is a story of a female shinigami (death god) who refers herself as Momo. Even though she is a death god, she is a cute and caring one which is very different from the typical death gods that we most common know. She even cries for the sake of the souls she takes. Momo has a black, spunky, often rude black cat, named Daniel who seems to travel with her.

Each episode has what seems like two main characters, Momo and the person whose soul she takes.

Shinigami no Ballad is a pretty good anime. It can get slow and boring sometimes, probably because of the music and dull colors. SNB is an anime show which would really get to you if you had that taste for a drama series. It could get boring since there is no major action or anything. It often gets sad and dramatic towards the end of each episode.

I would strongly suggest this to someone who looking for a change to watch it. 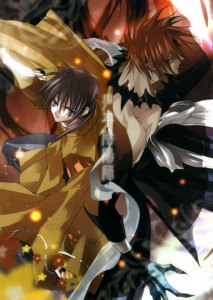 I could tell straight away that this anime would be above average. The artwork was really good. Think of Fullmetal Alchemist… No… I really mean it; the main character looks just like Edward with black hair. Abe no Masahiro is a thirteen year old boy who wants to be a Onmyouji, unfortunately for him, his grandfather is the greatest one around and he sealed his powers. But all of a sudden he was able to see a Spirit and his abilities start to show again, unlocking his sixth sense. Mokkun/Guren starts following him around and helping him fight evil spirits, all this is just training in order for him to become the greatest Onmyoji ever alive.